Breaking News
When Governor Jared Polis took to the stage on February 18 at ETHDenver, the longest-standing cryptocurrency conference in the world, he was preaching to the choir.

“Most people don’t trust either big corporations or the government,” Polis added. “And that is what blockchain allows us to solve for. We trust ourselves.”

ETHDenver is short for Ethereum Denver, a nod to the open-source blockchain Ethereum. Since this area of technology can be confusing to newcomers, here’s a crash course:

Blockchain is “a distributed database that is shared among the nodes of a computer network,” according to Investopedia. “The innovation with a blockchain is that it guarantees the fidelity and security of a record of data and generates trust without the need for a trusted third party.”

The revolutionary blockchain technology’s most popular usage comes in the form of cryptocurrencies, which are virtual currencies that aren’t controlled by a centralized authority — unlike hard currencies, such as the U.S. dollar.

Cryptocurrencies like Bitcoin and Ether, the cryptocurrency used on Ethereum, have become extremely popular and turned into lucrative investments for some people, who have benefitted from steep increases in the values of the currencies. But others have lost a lot of money investing in cryptocurrencies: It’s a high-risk, high-reward area.

Jared Polis was feeling it on stage at ETHDenver.

Standing In front of a packed house at the Sports Castle, headquarters for ETHDenver, Polis easily won over the crowd. “I like this guy,” one listener said to his friend. Polis, who made his large fortune in technology, was speaking his language, the language of crypto and blockchain.

The governor reminded the audience that when he was serving in the U.S. Congress, he founded the Blockchain Caucus, which now has 37 members. Polis also recalled the time that a U.S. senator he wouldn’t name wrote a letter arguing why cryptocurrencies, and Bitcoin in particular, should be banned, since criminal organizations can use them without law enforcement detecting the transactions.

“I basically took his letter and I almost word for word made it ‘ban cash,”https://www.westword.com/” Polis said to applause, noting that criminal organizations can just as easily use cash to fund their operations.

Polis spent the rest of his time on stage citing the work that his administration has done in the crypto realm. “Our state was the very first state to hire a chief blockchain architect,” Polis said of the 2019 hire of Thaddeus Batt. “We see [blockchain] as a critical part overall of Colorado’s innovation ecosystem.”

That same year, Polis signed the Digital Token Act in Colorado into law, which some crypto enthusiasts credit as a major factor in the explosion of the industry in Colorado. 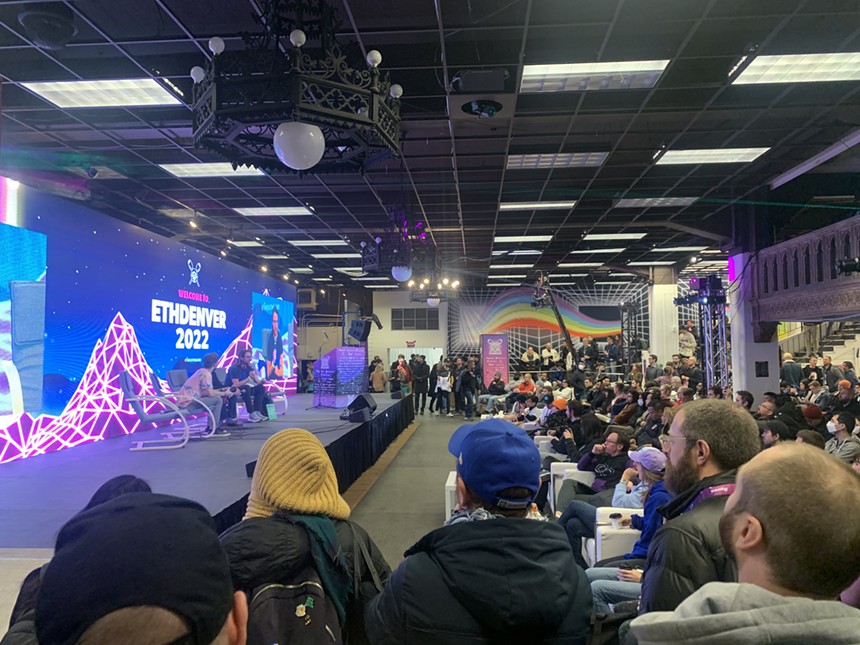 ETHDenver attracted a crowd to the old Sports Castle.

Polis, a libertarian-minded Democrat, did not get into the negative aspects of cryptocurrency, including the highly volatile nature of cryptocurrencies like Bitcoin, or the detrimental environmental impacts of cryptocurrency mining. Instead, his talk was a celebration of the crypto technology that some proponents believe will replace physical currencies.

The multi-day conference at the Sports Castle and other Denver spots, such as the nearby Art Hotel and Temple, has attracted thousands of in-person attendees, as well as a far larger online audience. But the event had modest origins.

A decade ago, Denver’s crypto enthusiasts began hosting meetups where they could network and talk blockchain. In 2017, those meetups were transformed into the ETHDenver conference, which is now world-renowned; this year’s edition includes a massive NFT art gallery created by 126 artists from 15 countries.

Polis and other state officials added to the action at ETHDenver conference with the Colorado Jam Incubator, which has tech geeks tackling a range of issues. In recent days, one team has been working on developing a blockchain technology program to track the branding of livestock in the Colorado agricultural industry. Yes, the actual hot-metal branding of a cow’s butt.

“When a cow wanders off and gets stolen, you want to know whose cow it is,” Polis explained.

The big, on-stage announcement from Polis was that Colorado would become the first state to accept cryptocurrencies for payment of state taxes and fees.

“We won’t be holding any assets in that form, but we will have a layer that allows for payment in those forms and then conversion into the units that we use, which is dollars,” Polis said, predicting that the program will be up and running this summer. While it ight have just a marginal impact on Coloradans doing their taxes in the beginning, the move is “important symbolically to show that we are a crypto-forward state,” Polis contended.

Polis also expressed his desire to see Colorado become the “Delaware of co-operatives.” Delaware has a reputation as a haven for American corporations that can register in that state without having a physical footprint there. Companies that work in the cryptocurrency and blockchain realm often structure themselves with employee and community ownership in mind — one reason why Colorado, which is eager to position itself as a leader in crypto, would strive to become the Mecca of co-operatives, the governor said.

And others picked up on that theme after Polis wrapped up his speech. During a subsequent panel, Kent Barton, an ETHDenver founder, predicted that “Colorado is going to be the Silicon Valley of Web3,” namechecking a new version of the World Wide Web that would be decentralized through the use of blockchain technology.

“I honestly see this event within three to five years taking place in Mile High Stadium. I’m not being facetious or fucking around,” Barton promised. “In five years, we’re going to be doing this in sports arenas in a non-hypey and non-douchey way.”

ETHDenver runs through Sunday, February 20; there’s an in-person waitlist but the live stream is open. Find out more here.