ApeCoin (APE-USD) was launched on March 16 by people associated with the Bored Ape Yacht Club (BAYC), which is a non-fungible token (NFT) collection. However, an investment in APE seems highly risky, so I suggest investing in other cryptos instead.

Admittedly, Yuga Labs does promise a lot of future utility for ApeCoin. However, one should keep in mind that the NFT market as a whole has been declining, and it’s not good news for APE in the long term.

In addition, a large chunk of ApeCoin’s supply is owned by Yuga Labs, Launch Contributors and BAYC founders. The combined total for insiders is 38% of APE’s supply. If a portion of this percentage is sold after the lock-up period, it can cause a nasty situation for ApeCoin.

ApeCoin is likely to perform in the short term, but I do not recommend holding it in the long run. The token is down by 25% from its all-time high of $17.75 in a month. Moreover, ApeCoin’s market cap of $3.7 billion is already quite large. Thus, I believe long-term investments in APE are an unwarranted risk.

I suggest you consider these three alternative cryptos that I consider to be significantly less risky.

Ethereum is arguably the most practical cryptocurrency. It is the second-largest crypto project and has consistently outperformed Bitcoin (BTC-USD). Moreover, Ethereum is the primary currency used to purchase NFTs, and it is one of the most innovative and prominent cryptocurrencies.

In addition, many Web 3.0 tokens are entirely dependent on the Ethereum blockchain, including ApeCoin. These are called ERC-20 tokens, and if you wish to make a transaction with any of them, you need to pay fees in ETH.

Consequently, Ethereum is likely to be in demand for a long time. As a result, it will produce more consistent long-term returns, unlike APE. Thus, if you believe the metaverse or NFTs will have massive value in the future, Ethereum should be your go-to investment. 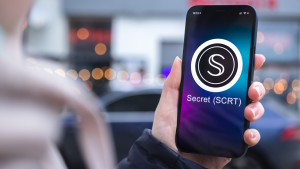 Blockchain networks such as Ethereum allow people to view the contents of an NFT and download it. However, the Secret network is particularly unique, as it has secret NFTs. These NFTs are essentially private and cannot be viewed or accessed by anyone. Thus, no more “save image as” jokes.

The project has already partnered with people such as Quentin Tarantino, who sold his first Pulp Fiction NFT on the network for $1.1 million. The partnership made the token jump more than 50% in two weeks. I expect there to be similar agreements in the future due to the uniqueness of the Secret blockchain.

The project is somewhat new and has a market cap of $800 million, which is relatively low for what it currently offers. The Secret network is not yet very well known. Still, a significant partnership in the future can change that.

As I’ve mentioned before, the NFT market has been declining. However, due to the prospect of future collaboration like the one I’ve discussed above, I believe that SCRT is a worthy investment.

I believe Monero to be one of the most undervalued coins. It is arguably the most private cryptocurrency, as no one can track your transactions. For example, cryptocurrencies such as Bitcoin or Ethereum aren’t exactly anonymous. Anyone can scan their blockchain and track any wallet on the network.

In the case of Monero, the blockchain is entirely private — so much so that even the IRS has a $625,000 bounty for anyone that can crack the system. Thus, I believe Monero will likely replace Bitcoin and Ethereum for confidential transactions due to blockchain tracking becoming an issue.

In addition, Monero has started to perform quite well compared to the rest of the market. It has gone up by more than 28% in the past month, whereas the rest of the market is still down. In essence, Monero does not have the most ethical use case, but it can certainly be a good investment if you’re in it for the profit.

On the date of publication, Omor Ibne Ehsan did not have (either directly or indirectly) any positions in the securities mentioned in this article. The opinions expressed in this article are those of the writer, subject to the InvestorPlace.com Publishing Guidelines.

Omor Ibne Ehsan is a writer at InvestorPlace. He is also an active contributor to a variety of finance and crypto-related websites. He has a strong background in economics and finance and is a passionate advocate of blockchain technology. You can follow him on LinkedIn.